The variant of Savage Dragon #137 featuring Barack Obama on the cover is an incredibly difficult comic book to find (while meanwhile there are plenty Amazing Spider-Man #583 variants out there), which begs the question: why?  Why is this comic such a challenge to find?  In this blog post, I will answer that question!  It all has to do with the circumstances that led to this comic’s creation, and the sales numbers for Savage Dragon comics at the time.

Super Endorsement: Savage Dragon Backs Obama! As reported by the NY Times in August of 2008.

The celebrity endorsements have begun!

But as relates to the scarcity of this variant of the comic, the relevant paragraph of the NY Times piece is this one:

NY Times states: “one in five copies will have the Obama cover.” 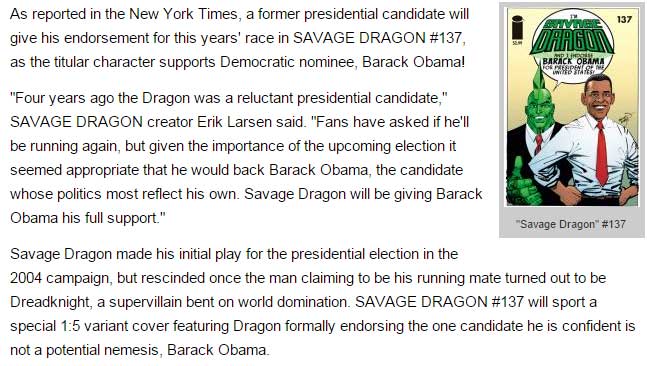 “Savage Dragon #137 will sport a special 1:5 variant cover featuring Dragon formally endorsing the one candidate he is confident is not a potential nemesis, Barack Obama.”

So if we know that this Obama variant cover was a 1:5 retailer incentive variant (if a retailer committed to buying five “regular” copies of issue #137 on a non-returnable basis, then they could get their hands on one “variant” copy), then figuring out how many copies are out there is simply a mathematics exercise, if we know the total sales figures.  And fortunately, there is a wonderful resource out there called Comichron that chronicles the sales numbers month by month (here is their page for September 2008).  As we can see, the titles are ranked from highest to lowest sales, with Savage Dragon #137 in the #202 spot with sales of 7,935 copies.

So now we can do the math.  If every batch of 5 copies out of that 7,935 number came with a variant, then the maximum number of variant copies is 1,587.  However, the assumption that every retailer participated is just that: an assumption.  I have seen it argued that the likely number of actual variant copies is closer to 1,000, because not all retailers would have participated.  But whether it is 1,000 or 1,500, we’re talking about an extremely low number.    And that’s why it is so difficult to find copies of this variant, whereas it is relatively simple to find copies of the other prominent comic featuring President Obama on the cover, Amazing Spider-Man #583.  That comic was published in March of 2009, and drew the attention of the Wall Street Journal, in this piece:

A fun article title!  The piece mentions issue #137 of Savage Dragon, as well as mentioning Amazing Spider-Man #583.  Note the discussion of the sales numbers of issue #583 in this paragraph:

Issue #583 sold over 350,000 copies, making it the best-selling regular series comic book in a decade.

Let’s see if Comichron corroborates those sales numbers in its page for January 2009:

So, what was the incentive offer given to retailers for this issue?  This one is a little trickier.  Instead of a having to buy a fixed 5 copies in the case of Savage Dragon #137, for Amazing Spider-Man #583, as reported here by newsarama the offer was tied to exceeding previous orders of issue #575:

The conditions for ordering the Obama variant were that if retailers ordered more copies of issue #583 than they had ordered of #575 by a cut-off date, they could order as many variants as they wanted, while supplies lasted.

This seems very open-ended, where the number of total variant copies out there may therefore be quite high, especially given the jump in sales numbers from the 70,000 range for issue #575, all the way up to 350,000+ copies indicative of retailers handily exceeding their orders for issue #575.  In situations like this, the CGC Census data comes in quite handy as a data source.  As of this writing, CGC has graded a grand total of 1,418 copies of Amazing Spider-Man #583:

As of this writing, a grand total of 1,418 copies of the Obama Variant of Amazing Spider-Man #583 have been turned in to CGC for grading.

With its low print run standing in stark contrast to Amazing Spider-Man #583, and as the first comic book to feature Barack Obama on its cover, the Obama variant copies of Savage Dragon #137 are a challenging find but a highly interesting comic to consider for your collection.