Here’s a rare Savage Dragon comic that is interesting on multiple levels:

Let’s start with points #1 and #2.  If you were interested in finding out which comic book contained Invincible’s first appearance, your first thought might be to run a Google search…  However, if you were to search Google today on Invincible First Appearance guess what you would find?  You would find this:

If you were to search Google today to find out Invincible’s first appearance, you would get back bad information… Wikipedia incorrectly lists Tech Jacket #1 as that key first appearance. WRONG!

The first result is a Wikipedia page, which claims that Tech Jacket #1 contains Invincible’s first appearance.  This is demonstrably FALSE, as I will now demonstrate.  First, we need to establish what a “first appearance” means.  This is not always clear-cut when it comes to comics.  In fact, if you were to look at a CGC graded copy of Invincible #1 (January 2003 publication date) it would list the first “full” appearance of Invincible in the label note.  But in fact, Invincible appeared in a comic book that was published chronologically earlier: Tech Jacket #1 contained a multi-page Invincible “preview” comic; and the publication date on Tech Jacket #1 is November 2002.  However!  Savage Dragon #102 also contains an Invincible Preview comic and was published in August of 2002.  Therefore, the claim made in the Wikipedia page is demonstrably FALSE:  Savage Dragon #102 was chronologically earlier by three months comparing the publication dates, and inside its pages was a preview comic introducing the world to Invincible in what would be considered a promotional / advertisement spot.

This is a similar situation to Rust #1 (chronologically, published a month before Spawn #1) where Spawn appears within the pages of the comic book, but not in a manner that is integrated into the story itself.  Instead, it is outside of the story, in a promotion.  This is parallel to the case with the Invincible “preview” comic that appeared in Savage Dragon #102.  Instead of a one-page pin-up style advertisement however (as in the case with Spawn), this preview comic was a multiple page teaser that entices the reader with a good deal of story and artwork and then ends with “Continues January in the pages of Invincible #1.”

Below are some photos of the Invincible Preview inside Savage Dragon #102, as you can see this is way more than a basic advertisement (as in the Rust #1 / Spawn case), instead this is truly a full introduction to Invincible in a “mini-comic” format. 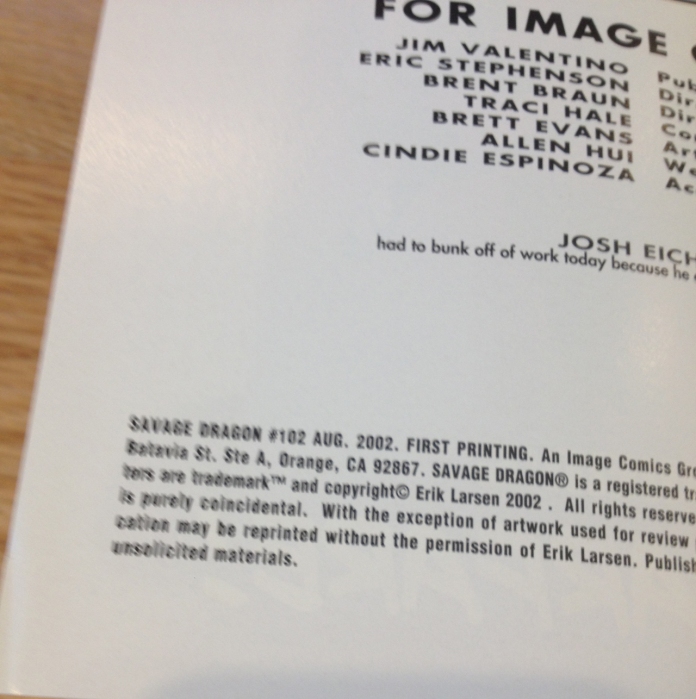 This shot shows the publication date of August 2002. That pre-dates Tech Jacket #1, proving beyond a shadow of doubt that the Wikipedia claim is FALSE.

Continued January in the pages of Invincible #1. If it is CONTINUED in January, then it STARTED in August, in Savage Dragon #102.

And here are how the CGC labels look for these three different comics:

Savage Dragon #102 is clearly an important key introducing the world to Invincible via a “preview” comic, and yet at this moment in time as evidenced by my Google search, the world seems to believe Tech Jacket #1 holds that distinction.  As I have shown, that is demonstrably FALSE, because Savage Dragon #102 has a publication date of August of 2002 while Tech Jacket #1 has a publication date of November 2002.  With its key importance, low print run, and the fact that people don’t seem to know about it, Savage Dragon #102 is an excellent candidate to collect, with excellent relative value.